It’s been a year now since Scarlett has been on this earth. So I couldn’t wait another second in reflecting and getting down her birth story.
It was an unprecedented year and nothing I could have ever expected. Things had seemed “normal” even up to the day of her birth and then the next day everything changed.
But let’s start from the beginning…. 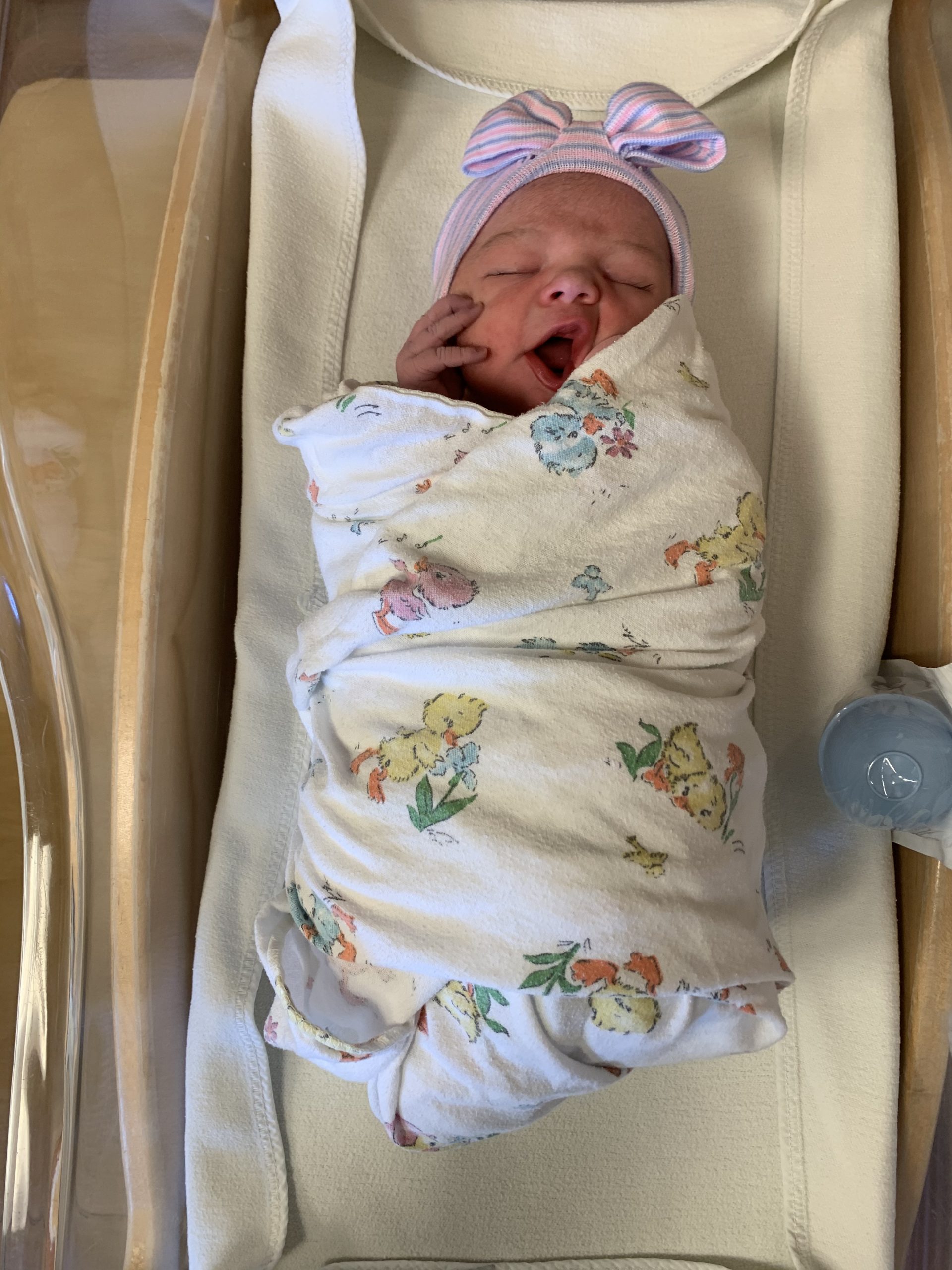 I was already a c-section mama from Silas but I was hopeful that things could be different this time. As time progressed in the days leading up to Scarlett’s due date, the doctors made me very aware that Scarlett had yet to move down into my pelvis and things didn’t look much different from two years earlier with Silas. That’s when I started YouTubing videos of how to get the baby to move down. You could catch me at any given moment in the living room upside down or on a labor ball then. A week or two later at an appointment they shared with me that there was still no progress and I should start thinking about a c-section. Her due date was March 19th, and I was less then two weeks out from that visit. They said their next available date to schedule was March 17th! “How lucky!?” I thought. “How cool!? St. Patrick’s Day!” So I took the date. They told me to come in one more time that following Monday just to be sure nothing changed. Nothing did. But the doctor also explained that something earlier became available and asked what I thought about having a baby on Friday the 13th? I thought for a moment and said “eh, I’m a Christian, God’s in control not a special date.” So I took it.
I remember someone telling me once that the number 13 in Italy is considered lucky (we are Italian) because it means “hit the jackpot” and then after I scheduled, my dad told me that good things have always happened to him on the 13th in his life.  I think he even said that’s when he got his first girlfriend (lol). The date started to feel really special, like they already had these little stories tied to them. But little did I know it was truly the best decision I could have made. (I’ll get to that in a minute.)
So the night before the surgery, I had my bags packed and knew we had to show up at noon for a 2 o’clock surgery.
But when I woke up that morning, there was a voicemail asking if I’d like to come in at 9 because my doctor had his 11 o’clock cancel. I called my husband when he was on the way to drop our son Jameson off at school and was so excited we could go early. Mostly because I hate not being able to eat lol. But also I couldn’t wait another minute to see my babies face and to find out if these last 9 months I had been carrying a little boy or girl in there! I called my mom and my mother in law immediately. My mother in law came quickly to stay with kids and my mom headed to the hospital.
Neil and I jumped in the car and I remember it felt a bit like deja vu all over again from just doing this trip with Silas 22 months earlier.
We parked and checked in just like last time. Except this time they asked me if I had visited any of the highlighted countries on a map they had on the desk. These were all countries that had been hit with that novel virus we heard about on the news. Of course I hadn’t and it  seemed like something so far off from reality. Something I’d assume I’d never really have to deal with.
My mom arrived on time and shortly after my dad arrived and they even let my dad come back to the prep area. I remember my mom asking the doctor about the new virus and he was saying there was a shortage on supplies already. Still it didn’t phase me much. The doctor told us he ran late but I’d be in the OR by 1:30. I kissed my mom and dad before they headed to the waiting room and gave Neil a quick kiss knowing I’d see him in a few minutes once they had done the spinal. 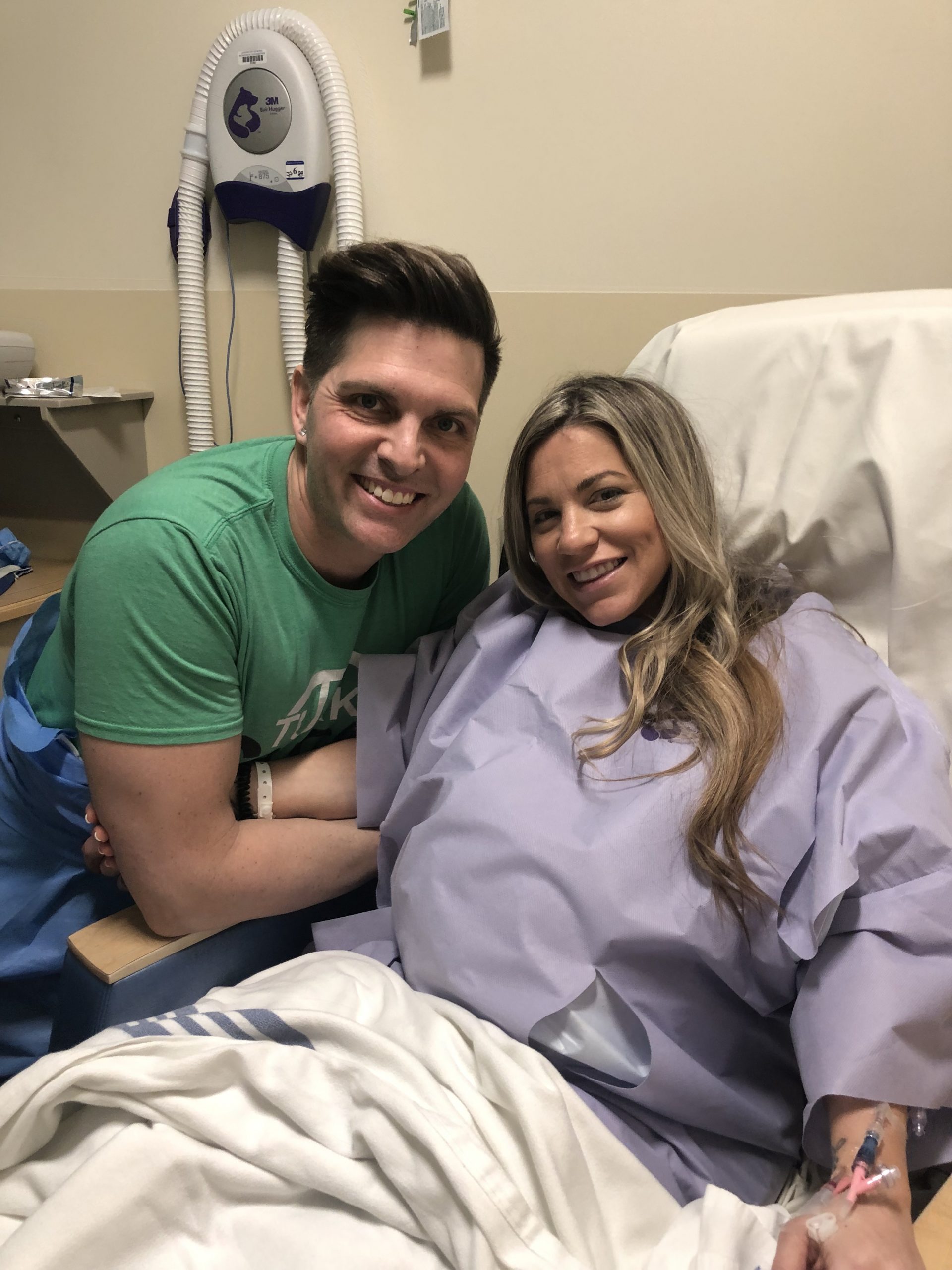 I laid there just like last time and I remember looking around at everyone’s name tag, still searching for a name for our little one. We had Saylor in mind for a girl and River for a boy, but something about those names still didn’t feel right. And then it hit me… “Scarlett!” I didn’t even know if I was carrying a boy or a girl but the name hit me like a ton of bricks. Neil walked in a few minutes later and I said “Scarlett! I’m laying here and it was like someone yelled her name in my ear.” He laughed and said “let’s wait and see if it’s even a girl, but yes, I love the name.”
The doctor walked in and asked if I felt my legs and sure enough I couldn’t feel a thing. So it was time…time to meet our baby.  There’s no better feeling. I told the doctor that I wanted my husband to be the one to tell me if it’s a boy or girl. And then I asked Neil to take some pictures of them pulling the baby out and they agreed he could.  There was so much pulling and tugging and I remember the doctor saying “this is the longest c-section delivery I’ve ever done.” But I could of cared less. I just kept my eye on the prize, telling myself “it will be over in minutes and you will know your baby soon!”  Not knowing the gender made everything bearable.  They finally pulled the baby out and Neil looked at me with tears in his eyes knowing my desire and said “it’s a girl.”  I said ‘it’s a girl? Oh my gosh it’s a girl! I got my girl.”  She was the loudest crier I’ve ever heard. And she did not stop. Neil said “well she’s got her moms lungs!” And everyone laughed.  They checked her out and Neil was cutting the umbilical cord. The rest of the team was sewing me up and as I lay there with no one around me, tears were streaming down my face and I just kept repeating to myself out loud “I got my girl.” Talk about a moment I’ll never forget. 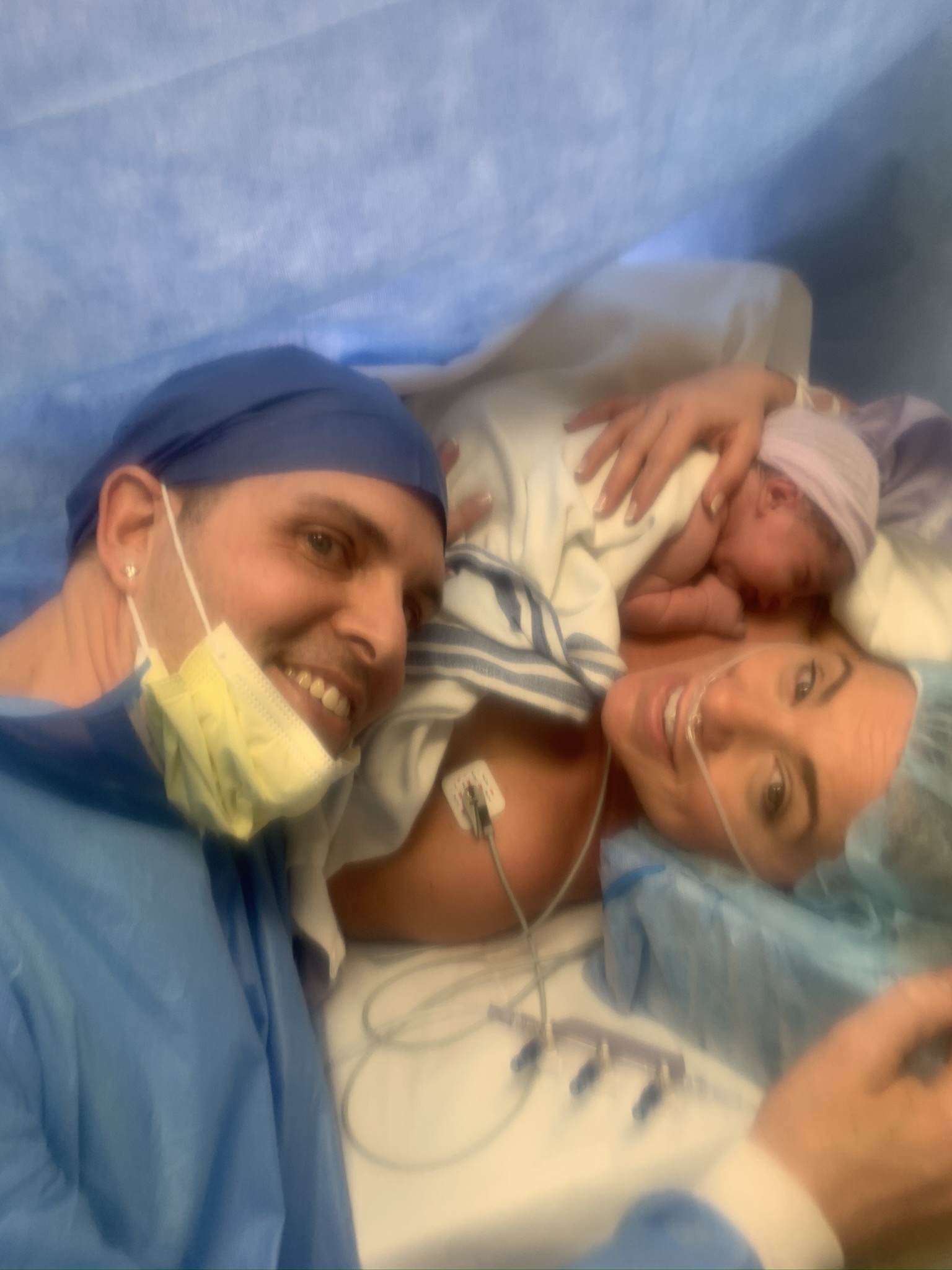 After they cleaned her up, they laid her on me and all I saw was her beautiful black hair and full lips.  The doctor said “she looks like a little Angelina Jolie.”  I was in heaven. 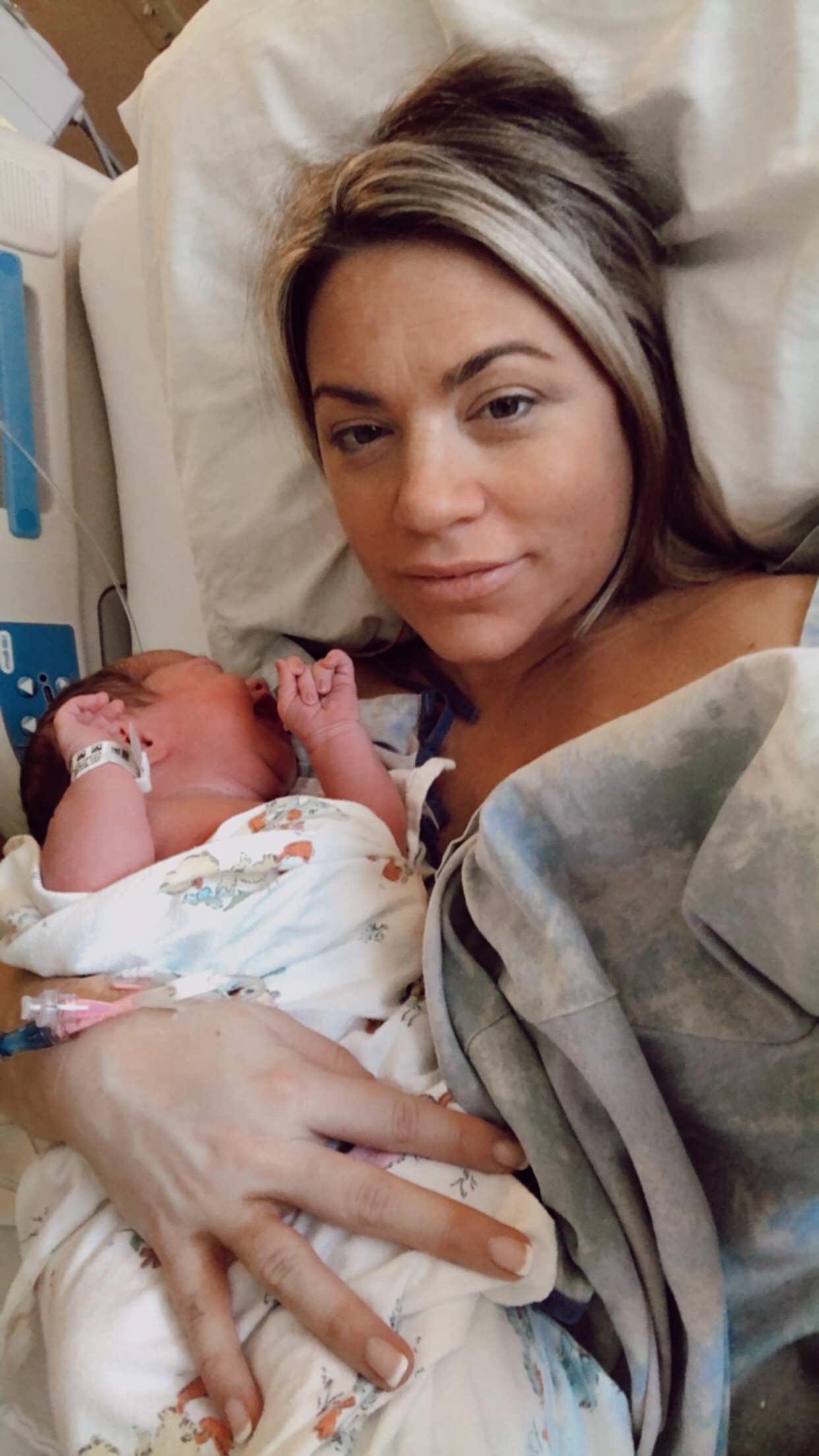 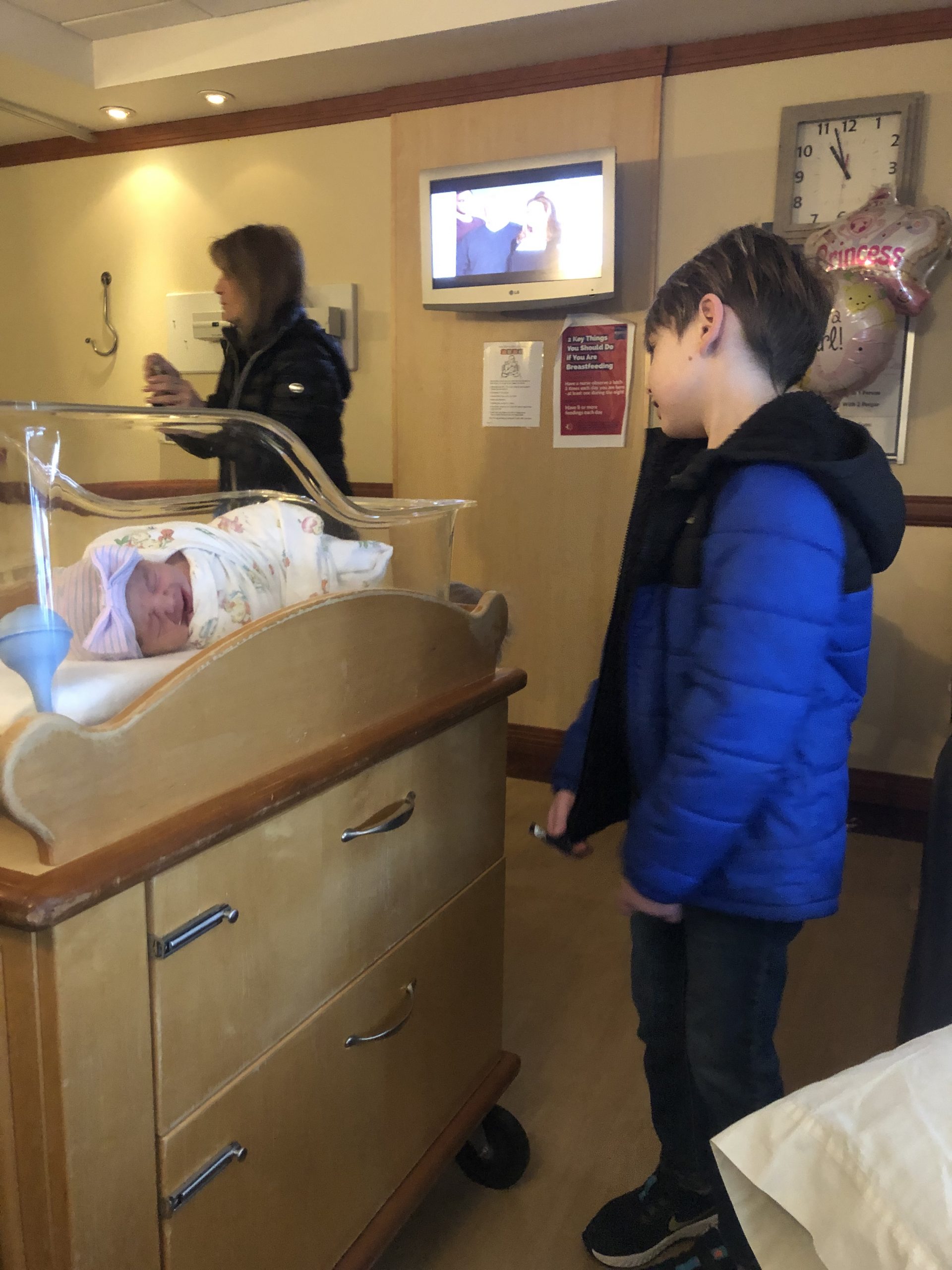 Then the next day happened…
We had scheduled a photographer to come that day to take “fresh 48” photos with us and the baby and our other kids. But early that morning a nurse came in and said “we just got word at our meeting that there are no more visitors due to Corona.”  We were shocked! Some of our kids hadn’t even been yet to meet the baby! Minutes later our doctor came in and kept us calm and said “you have until 3 o’clock and you guys are all safe here.” We called my mom who was supposed to bring all the kids and told her “you have to rush here because they are shutting the doors.”  The photographer contacted me and we both agreed that maybe we get pictures the following week until all this calms down.  Oh, were we all so clueless. The good news is that the girls got to meet their baby sister and we got to have a big family visit before it was just us the next two days at the hospital. 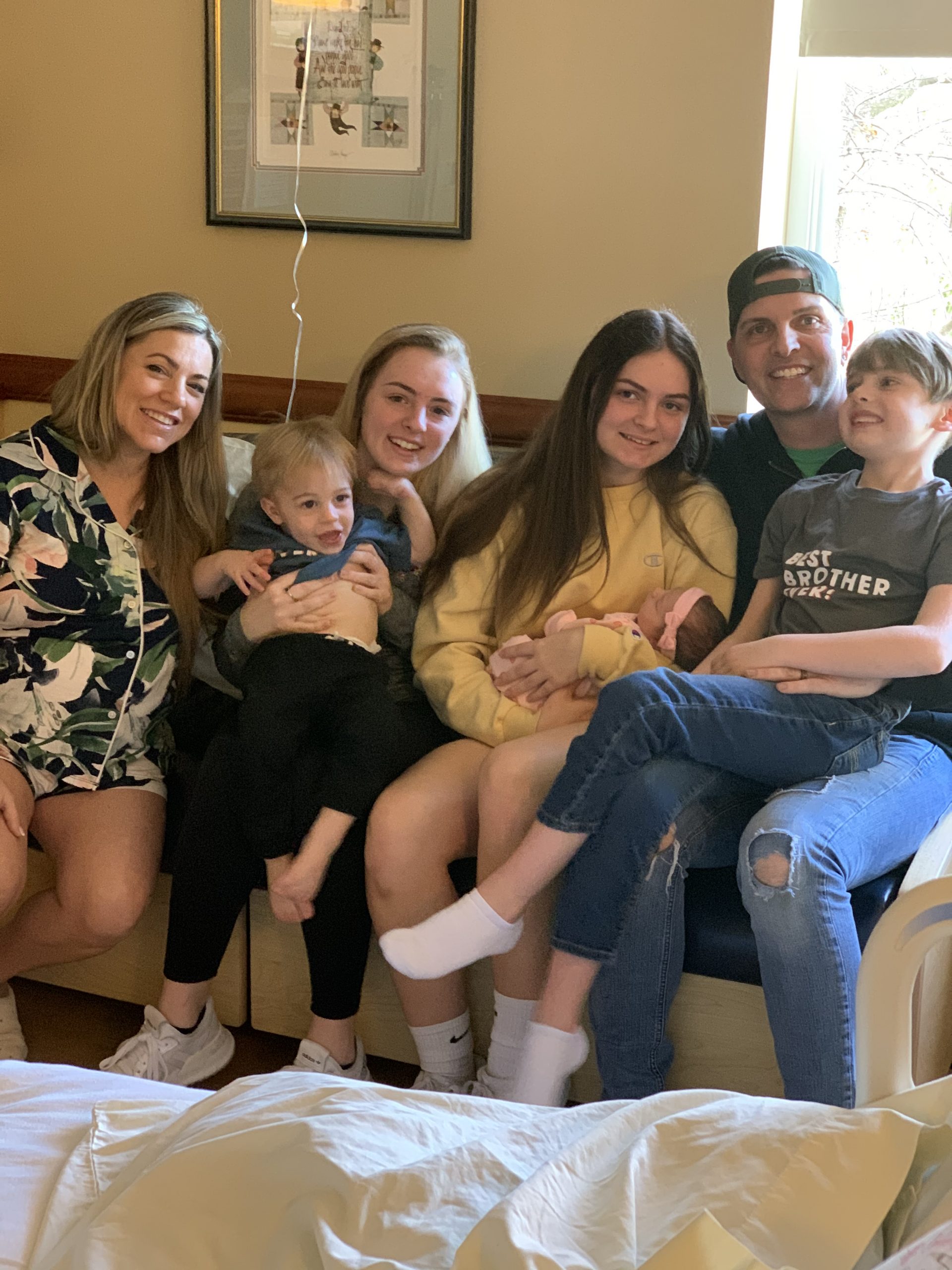 Looking back I feel like God really looked out for us.  Had we stuck to the 17th I may have been in that OR all alone.  But knowing my hope is in God and not a date, he proved to me that my hope is right where it should be.  I’ll tell my little girl that story when she grows up. I’ll tell her this to remind her that “God is in charge of it all.”  Not a lucky date or future you have all planned out. Life doesn’t work that way. God is in complete control of it all.  This is the one promise that has kept me grounded through the most uncertain of times this year. That and the blessings He puts in front of me daily.  And Scarlett Juniper Rohrbaugh, born March 13th at 2:25 PM, weighing 8 pounds and 2 oz. is one of them.
Thank you Lord. You are so good. 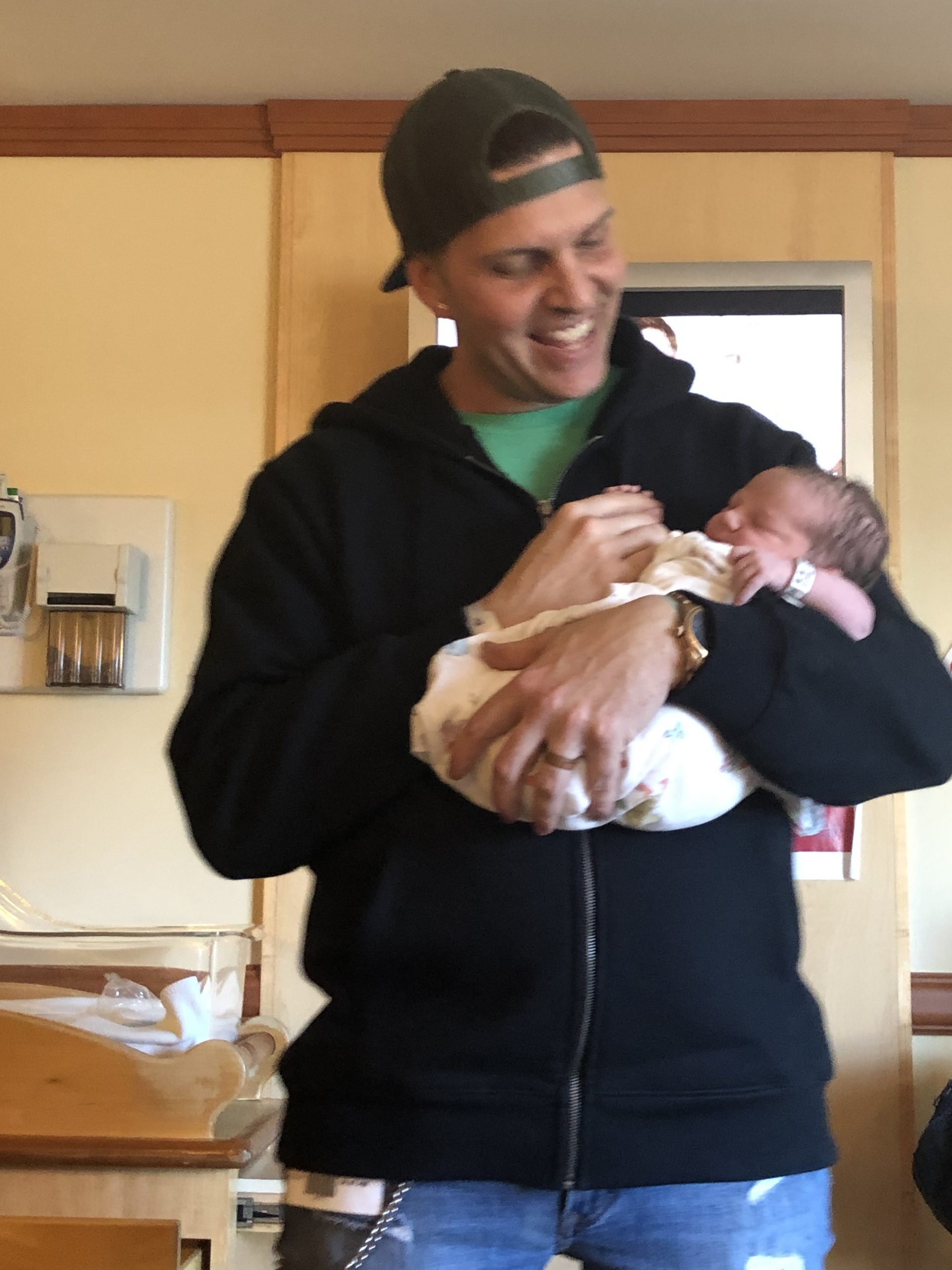 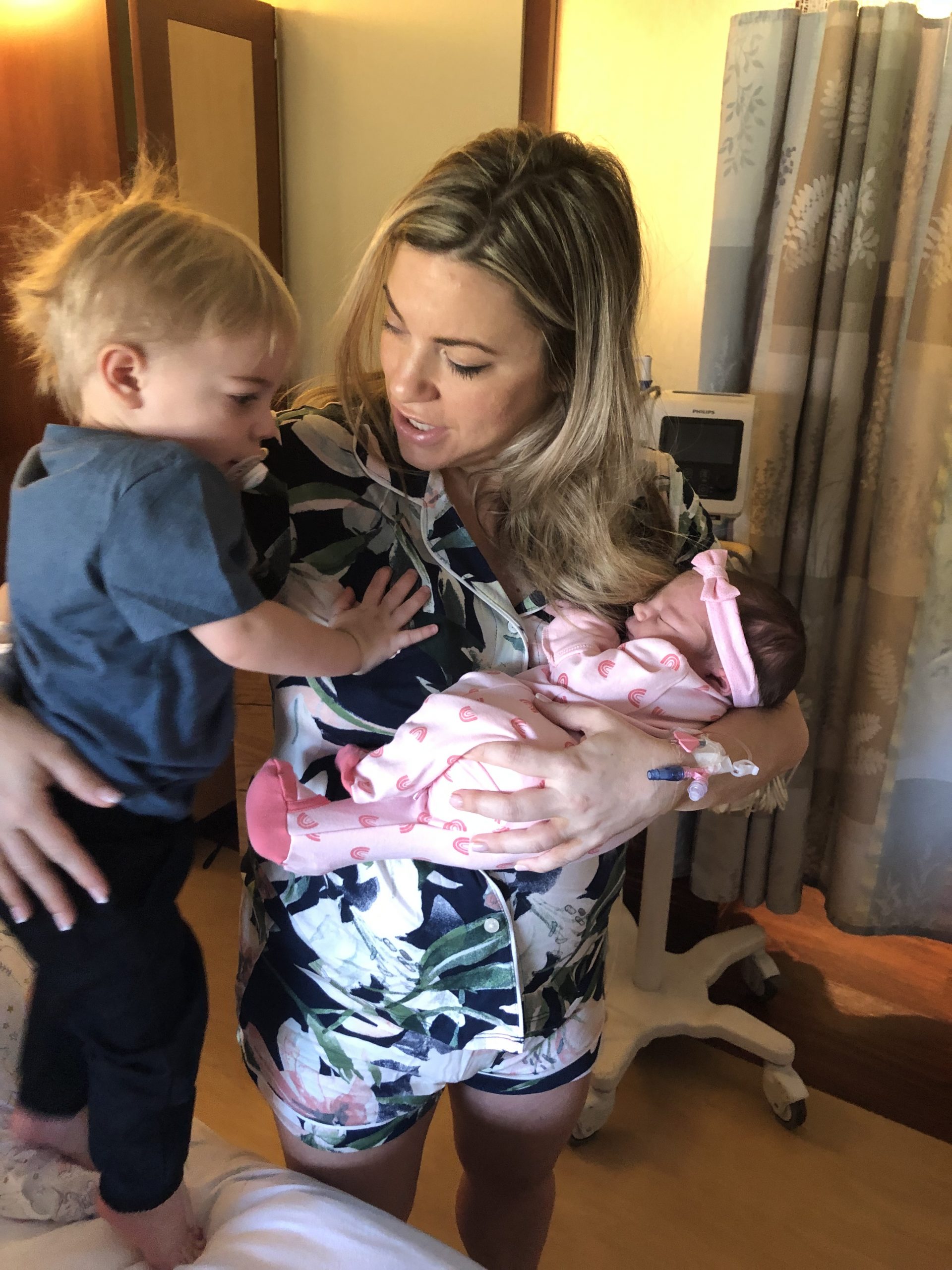 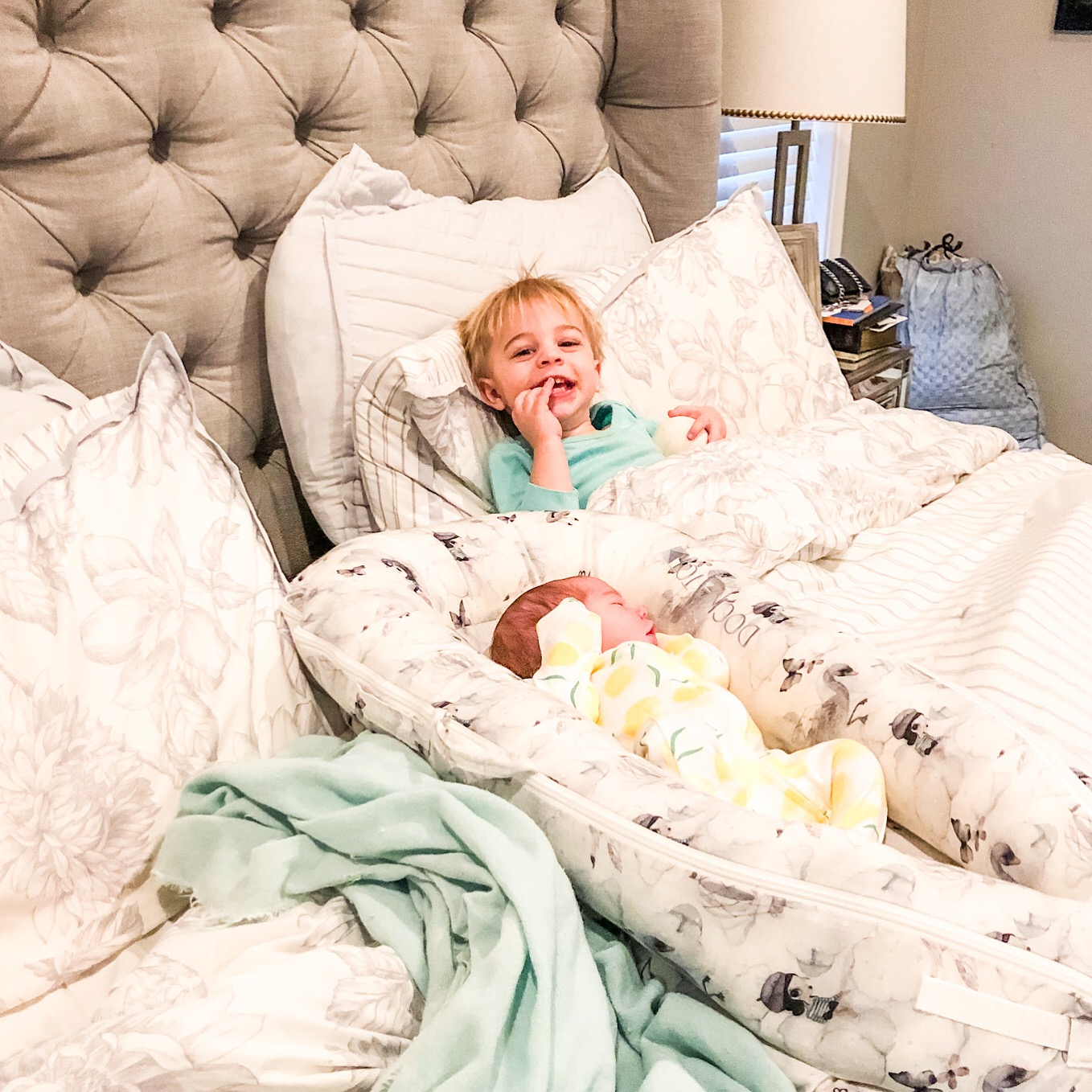 Hi I'm Jill! I'm so happy you are here. I hope you leave feeling encouraged and better than you were before you got here :)